Did you know there is historical evidence that backs up the three hours of darkness, the great earthquake, and the dead people coming back to life that all happened on the day Jesus was crucified?  Yes, ancient historians Africanus, Thallus, Phlegon, and Tertullian wrote about these amazing events!  It is recorded history that backs up the Bible!

The picture above is Golgotha hill in Jerusalem, Israel.  That is the place where Jesus was crucified and died to forgive the sins of all mankind!

“They came to a place called Golgotha (which means The Place of the Skull). 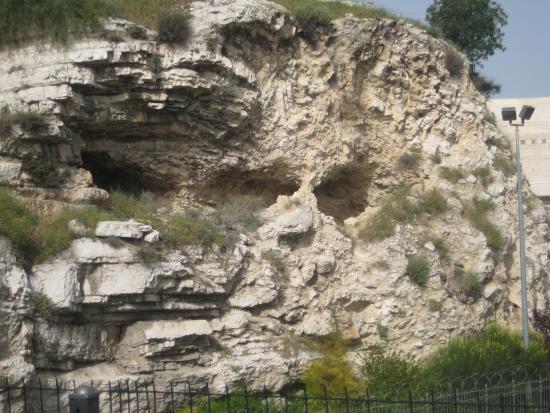 Let’s take a look at those incredible events that happened during the crucifixion of Jesus Christ:

“From the sixth hour until the ninth hour darkness came over all the land.  About the ninth hour Jesus cried out in a loud voice, “Eloi, Eloi, lama sabachthani?”–which means, “My God, my God, why have you forsaken me?”

In the next verses we read about the great earthquake and the miracle of the tombs breaking open and dead people coming back to life!  Remember, Jesus is the resurrection and the life, so when He gave up His Spirit and died, a bunch of people came back to life and started walking around!  We also read about the curtain of the temple being torn, which was also a supernatural event from God (that signified a new covenant where we can approach God with freedom and confidence through Jesus).

“And when Jesus had cried out again in a loud voice, he gave up his spirit.

At that moment the curtain of the temple was torn in two from top to bottom.  The earth shook and the rocks split.  The tombs broke open and the bodies of many holy people who had died were raised to life.  They came out of the tombs, and after Jesus’ resurrection they went into the holy city and appeared to many people.

When the centurion and those with him who were guarding Jesus saw the earthquake and all that had happened, they were terrified, and exclaimed, “Surely he was the Son of God!”

That is one incredible day!  Total darkness over the earth for three hours, a great earthquake, and dead people coming back to life!  Surely that would be recorded outside the Bible because so many people experienced it!  That’s right, history records it!  The historians don’t mention the curtain, but they talk about everything else that happened that day!  Here is research done by ChristianEvidence.net.  Listen to how these men try to explain what happened that day in history.  They thought it was an eclipse, but that did not make sense because it was not the right time for that.  Africanus knew it was supernatural.

Africanus wrote a five volume History of the World around A.D. 221.

“On the whole world there pressed a most fearful darkness; and the rocks were rent by an earthquake, and many places in Judea and other districts were thrown down.  This darkness Thallus, in the third book of his History, calls, as appears to me without reason, an eclipse of the sun.  For the Hebrews celebrate the passover on the 14th day according to the moon, and the passion of our Savior falls on the day before the passover; but an eclipse of the sun takes place only when the moon comes under the sun.  And it cannot happen at any other time but in the interval between the first day of the new moon and the last of the old, that is, at their junction: how then should an eclipse be supposed to happen when the moon is almost diametrically opposite the sun?

Let opinion pass however; let it carry the majority with it; and let this portent of the world be deemed an eclipse of the sun, like others a portent only to the eye.  Phlegon records that, in the time of Tiberius Caesar, at full moon, there was a full eclipse of the sun from the sixth hour to the ninth—manifestly that one of which we speak.  But what has an eclipse in common with an earthquake, the rending rocks, and the resurrection of the dead, and so great a perturbation throughout the universe?  Surely no such event as this is recorded for a long period.”

“Thallus wrote a history of the eastern Mediterranean world since the Trojan War.  He wrote his regional history in about AD 52.6.  Unfortunately his original writings have been lost, however he is specifically quoted by Julius Africanus as in the quote above, and Africanus was a renowned third century historian.  Africanus stated, ‘Thallus, in the third book of his histories, explains away the darkness as an eclipse of the sun—unreasonably as it seems to me.’  Thallus attempted to give a naturalistic explanation to the darkness during the crucifixion.”

“Phlegon was a Greek historian who wrote an extensive chronology around A.D. 137.  Phlegon provides powerful confirmation, identifying the year and the exact time of day.  In addition, he writes of an earthquake accompanying the darkness, which is specifically recorded in Matthew 27:51.”

“In the fourth year of the 202nd Olympiad (i.e. AD 33) there was ‘the greatest eclipse of the sun’ and that ‘it became night in the sixth hour of the day (i.e. noon) so that stars even appeared in the heavens.  There was a great earthquake in Bithynia, and many things were overturned in Nicaea.'”

“An additional possible reference to the Darkness, is related by St. Tertullian (160-220), in his Apology addressed to the “rulers of the Roman Empire”.  He also writes of the Darkness at Christ’s Crucifixion:”

“And yet, nailed upon the cross, He exhibited many notable signs, by which His death was distinguished from all others.  At His own free-will, He with a word dismissed from Him His spirit, anticipating the executioner’s work.  In the same hour, too, the light of day was withdrawn, when the sun at the very time was in his meridian blaze.  Those who were not aware that this had been predicted about Christ, no doubt thought it an eclipse.  You yourselves have the account of the world-portent still in your archives.”

The Bible is recorded history of events that actually happened, and even ancient historians back that truth up!  Pretty cool if you ask me!  There is plenty of evidence that God’s Word is true.  The world just doesn’t want you to know that!  Well, now you know!

Stand strong in your faith in Jesus Christ!  Grace and peace to you all!