Today was the first day of Christmas break for our kids, so I took them up to Daniels Park this morning.  Many of you may recognize this area from the main photo at the top of my blog homepage.  I have also posted many Scripture pins with photos from this area.  All of my past photos from the park have been from the summer, but I have always wanted winter photos, so I was pumped going out there today.  It was a perfect crisp blue sky morning and it is such a peaceful place to take in the full beauty of the Rocky Mountain front range. 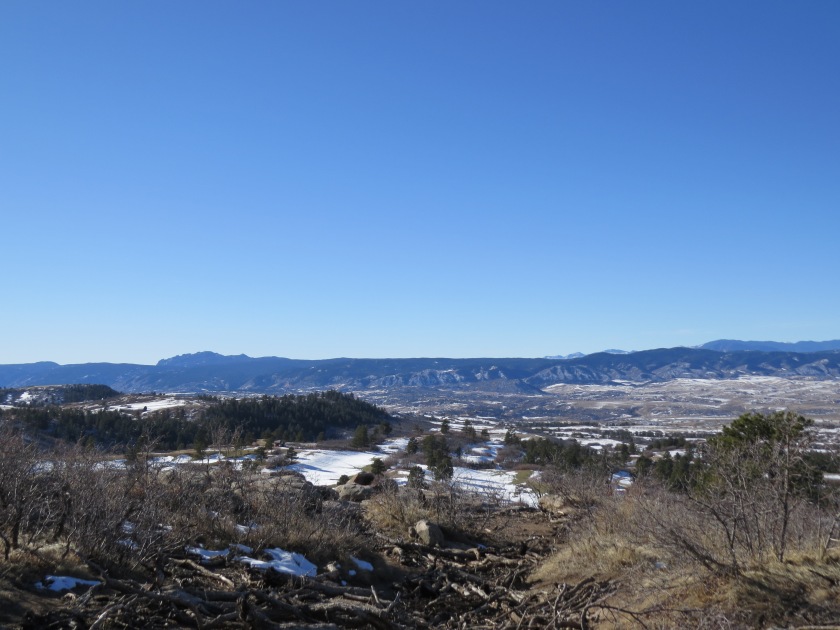 Daniels Park is located in Sedalia (next to Castle Rock) just 21 miles south of Denver.  We are about 26 miles southeast of Denver, so the park is only about a 15 to 20 minute drive from our home.  The area is rich in Wild West history and it is actually a 1,000 acre protected historic preserve complete with a roaming bison herd.  Kit Carson is said to have stayed in this area and cooked his last meal here before his death in 1868.  It is also home to the Tall Bull Memorial Grounds cultural area, which is 70 acres of private Native American land.

“The land that is now Daniels Park is bisected by a ridge known as Riley Hill, which runs roughly north-south to reach Wildcat Point at an elevation of 6,600 feet.  Long before Daniels Park was established, the area’s prominence and clear views made it a popular rendezvous point and route for traveler’s.  In the late 1850s or early 1860s, what is now Daniels Park road along the ridge was already the path of one of Colorado’s first Territorial Roads.  In 1868 noted trapper, scout, and army officer Christopher “Kit” Carson traveled south from Denver over Riley Hill and supposedly made his last campfire at Wildcat Point; he died soon thereafter at Fort Lyon.”

“The picnic area is located on Riley Hill, which was rumored to be a lookout for robbers plotting to rob stagecoaches in the days of the Wild West.  Kit Carson cooked one of his last meals on Riley Hill before he died in the area in 1868.”

The area I took all these photos from today is Riley Hill right next to the picnic area.  I also got a great shot of Denver from the part of Daniels Park road that goes through the Tall Bull Memorial Grounds.  I actually went to a powwow there when I was a kid in the 80s.  I met a young Native boy my age.  I was about 8 or 9 at the time.  Upon meeting me, he promptly grabbed me and wrestled me to the ground.  We wrestled for a bit in the hard dirt and rough sticks, then we stopped and we both started laughing.  After that, he threw his arm around my shoulder and gave me a hug and we were friends.  We ate together and laughed and hung out the rest of the powwow and it ended with us sitting quietly at the edge of the cliff enjoying the view.

As you see, this area is rich in history for both Colorado and my family.  Enjoy the photos!

“For the LORD is the great

the great King above all

In his hand are the depths

and the mountain peaks 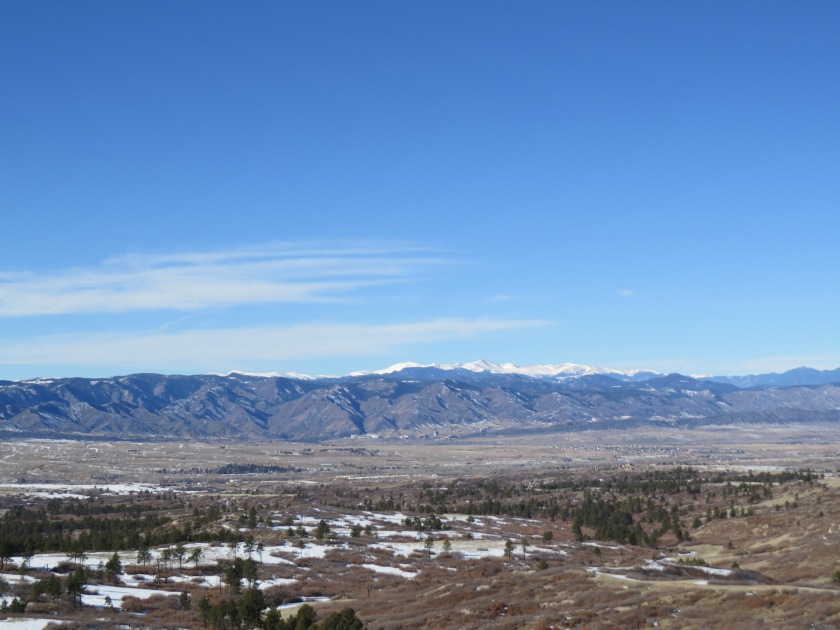 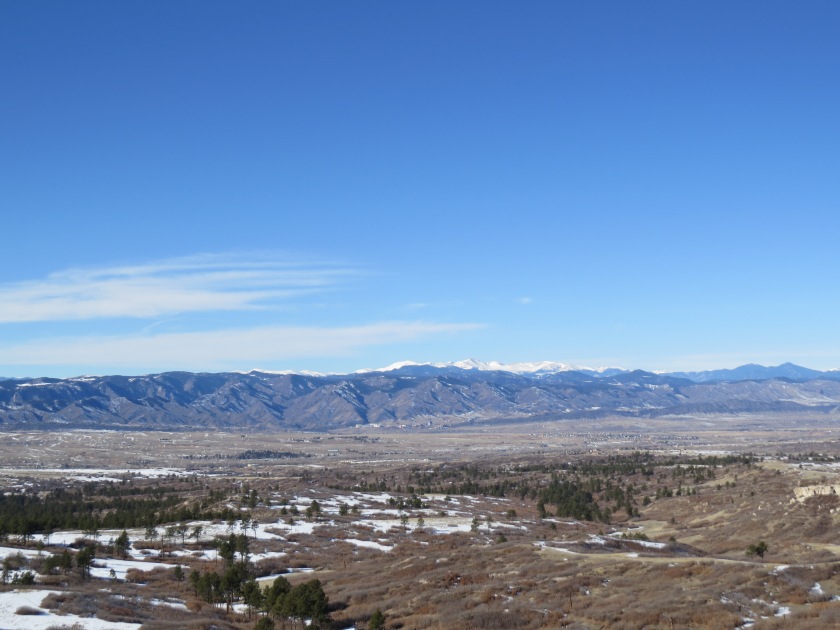 Our kids were loving it out there.  You can see the long ridge we were on called Riley Hill and the road that runs along it that was once a Territorial Road in the 1800s.  The entrance to the Tall Bull Memorial Grounds is just a bit north up that road.  Here is the zoom shot I took of Denver when we drove up there.

The Mile High city is beautiful, but we could see the inversion layer (also known as the brown cloud) over it today.  Most days are much clearer.  Sometimes air coming over the Rockies traps the air over Denver.  It’s only like that over the city at times.  The mountain air is always crisp and fresh here in Colorado.  It’s cool being far enough away from the city where we have plenty of wide open spaces, but being close enough to enjoy city life too.  The neighborhood where I grew up is just a few miles southwest of Denver in Littleton.

When we went back to the picnic area, we were blessed to see a hawk soaring along the ridge line.  It really is beautiful to witness God’s majesty in His creation!  We can truly see His glory from what He has made!

“For since the creation of the world God’s invisible qualities–his eternal power and divine nature–have been clearly seen, being understood from what has been made, so that men are without excuse.” 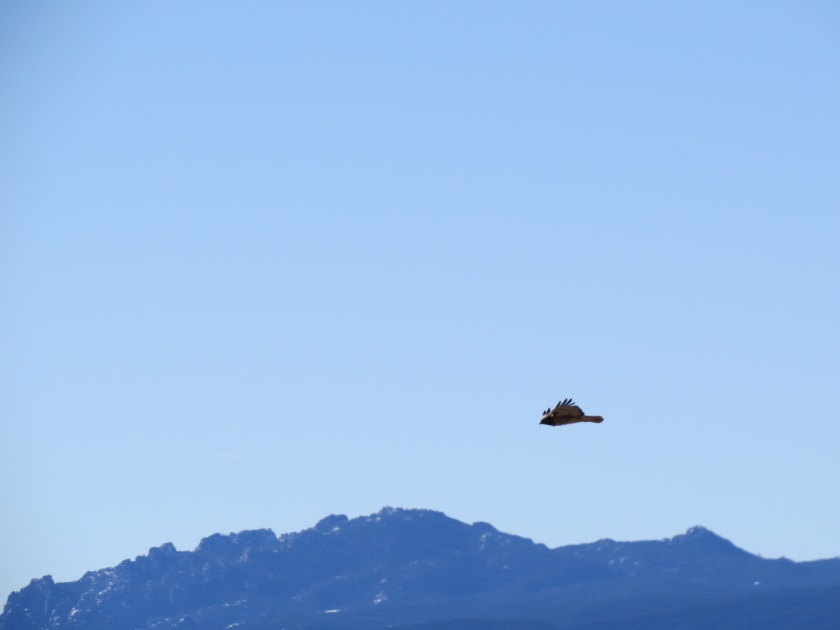 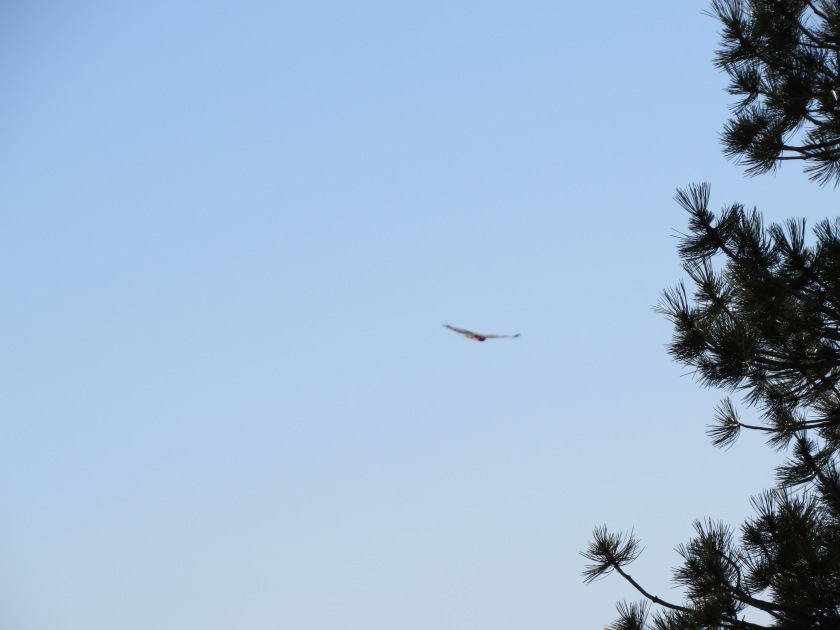 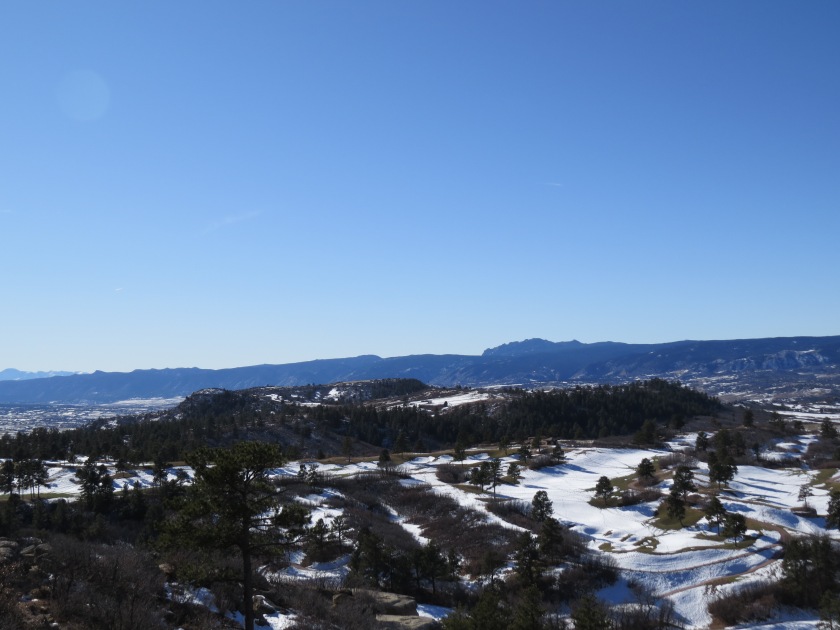 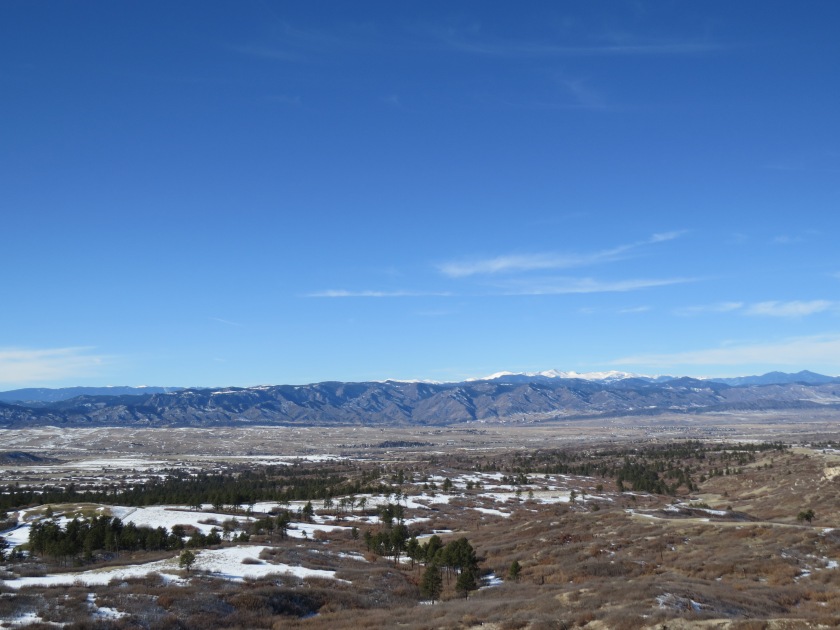 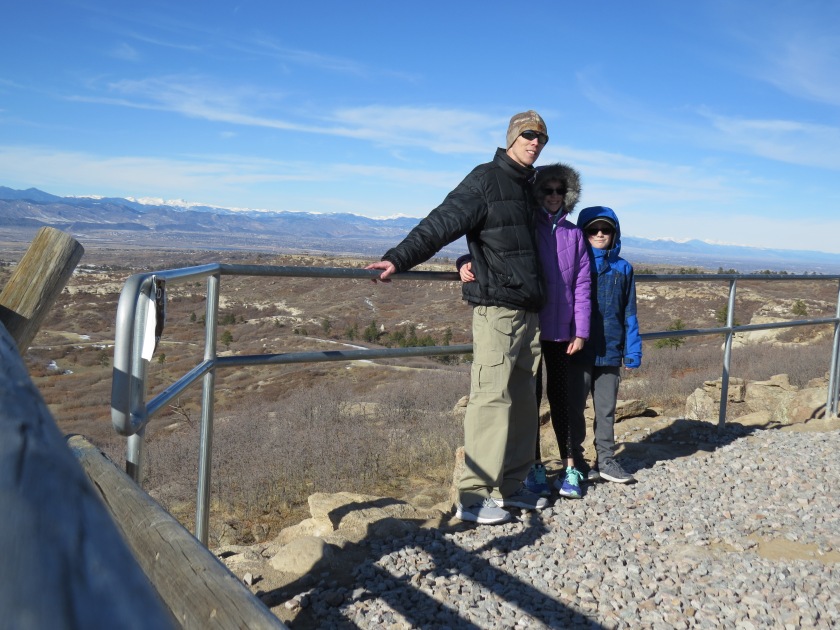 The rails were not there last time we visited and we were able to climb down on the rocks.  Guess they don’t allow that anymore.  Probably best for people’s safety anyway.

Hope you enjoyed our little trip to Daniels Park!  Always remember, Jesus loves you and He was born to set us free from sin and death!  That is what Christmas is all about!  God is offering everyone in the whole world eternal life and that is the greatest gift any of us could ever receive!

“For God so loved the world that he gave his one and only Son, that whoever believes in him shall not perish but have eternal life.”

Grace and peace to you all and Merry Christmas!

Hello everyone!  Just a quick post tonight.  A neighbor posted some cool photos of a Bobcat the other day and I thought you might like to see it.  Bobcats live here in Colorado, but it is very rare to see one, especially so close to Denver.  I have mentioned that this area use to be a Native American hunting ground and it is still very wild.  This Bobcat was walking through the golf course just up the street from our home.  They are bigger than people think.  Mountain lions and bears use it as a travel path too.  Never know what you are going to run into out here in Colorado!  It is a beautiful part of God’s creation, but you don’t want to get tangled up with that big kitty.  If you see one, it is wise to respect it and give it plenty of space.

“You bring darkness, it becomes night, and all the beasts of the forest prowl.”

This post will be less about my writing doing the talking and more about letting God’s creation speak.

“The heavens declare the glory of God; the skies proclaim the work of his hands.  Day after day they pour forth speech; night after night they display knowledge.  There is no speech or language where their voice is not heard.  Their voice goes out into all the earth, their words to the ends of the world.”

Here are a few pictures I have taken over the years with my good ol’ Canon PowerShot SX50 HS camera.  Yes, even the moon pictures.  Our house sits up on a hill with expansive views of the Rocky Mountains.  We are at 6,115 feet here in Colorado, so our night skies are crisp and clear most nights.  We can usually see the moon real good during the day too.  Our backyard faces south towards Pike’s Peak, so we get excellent sunrise and sunset views.  God’s creation speaks beautifully.  I take time to listen every day. 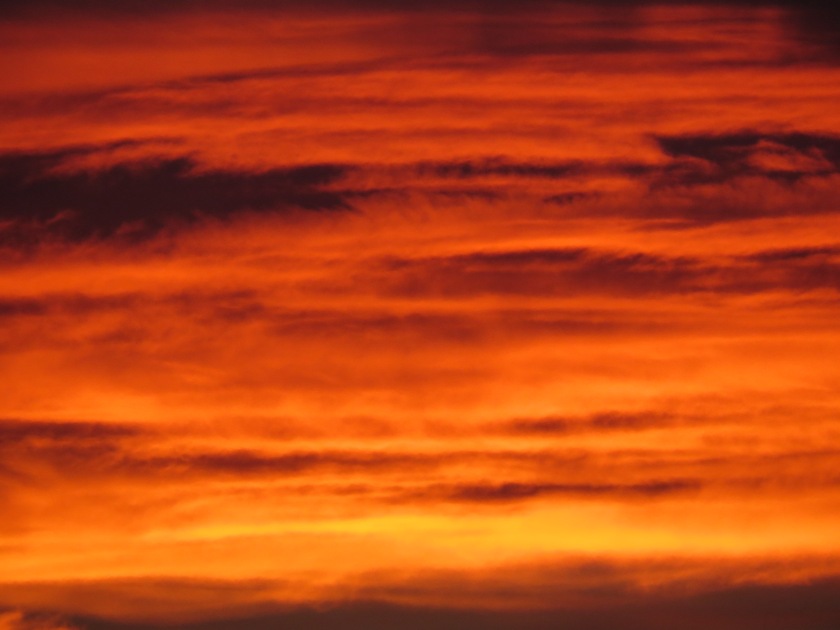 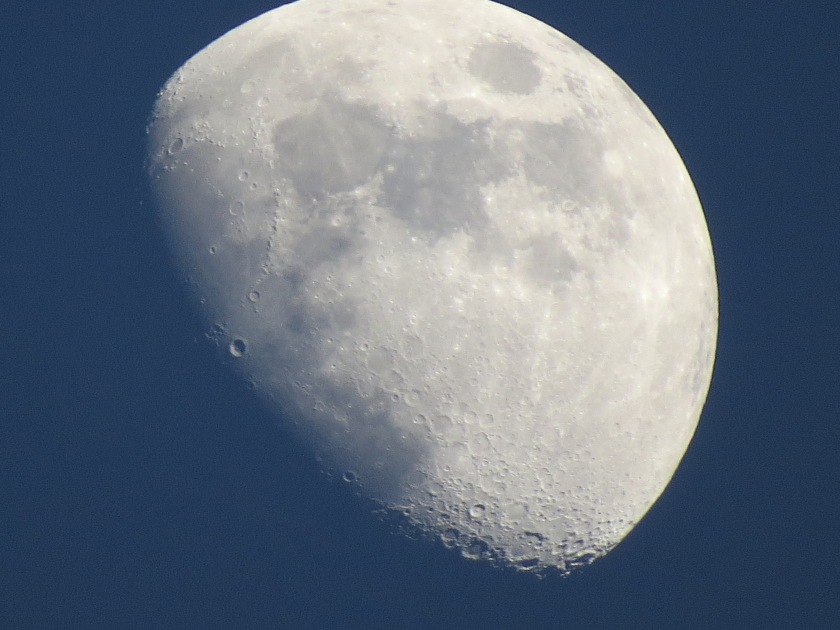 Creation speaks of God’s glory where you live too.

Peace to you all!