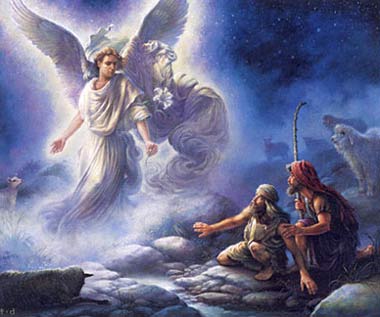 Christmas is the worldwide celebration of the birth of Jesus Christ.  He is our Lord and Savior and we honor and celebrate Jesus!  We all announce the birth of our children in a variety of creative ways.  God also announced the birth of His Son and it is very encouraging to read about the very creative and miraculous way His birth was announced!  I would like to share that with you during this time of celebration, so without further delay, may I introduce you to the historical record of the shepherds and the angels.

“And there were shepherds living out in the fields nearby, keeping watch over their flocks at night.  An angel of the Lord appeared to them, and the glory of the Lord shone around them, and they were terrified.  But the angel said to them, “Do not be afraid.  I bring you good news of great joy that will be for all the people.  Today in the town of David a Savior has been born to you;  he is Christ the Lord.  This will be a sign to you: You will find a baby wrapped in cloths and lying in a manger.”

“Suddenly a great company of the heavenly host appeared with the angel, praising God and saying,

“Glory to God in the

and on earth peace to men

on whom his favor

“When the angels had left them and gone into heaven, the shepherds said to one another, “Let’s go to Bethlehem and see this thing that has happened, which the Lord has told us about.”

So they hurried off and found Mary and Joseph, and the baby, who was lying in the manger.  When they had seen him, they spread the word concerning what had been told them about this child, and all who heard it were amazed at what the shepherds said to them.  But Mary treasured up all these things and pondered them in her heart.  The shepherds returned, glorifying and praising God for all the things they had heard and seen, which were just as they had been told.”

I once heard our previous Pastor give a sermon on this at Christmas and he talked about the status of a shepherd at that time.  Shepherds were considered “lower class” people in their society.  They were generally poor in material wealth and not many people would have considered what they had to say as of any importance.  It is beautiful and powerful that the Lord revealed angels to them and He chose them to spread the word about Jesus!  It is also a testimony of God’s power that people were amazed at what the shepherds said.  I’m sure people could see the wonder and amazement on their faces as God was in the midst of using them to spread the most important message the world has ever heard!

It is awesome that God sends angels to help us and communicate God’s messages at times!  It is awesome God chose a few humble shepherds to witness His glory and tell the world!  It is awesome God came to earth as a man to die for us, so we can be with Him forever in eternal glory!  That is the powerful message of Christmas, and to that I say Merry Christmas to the whole world!

“For to us a child is born,

to us a son is given,

and the government will

be on his shoulders.

And he will be called

17 thoughts on “Quite A Birth Announcement!”